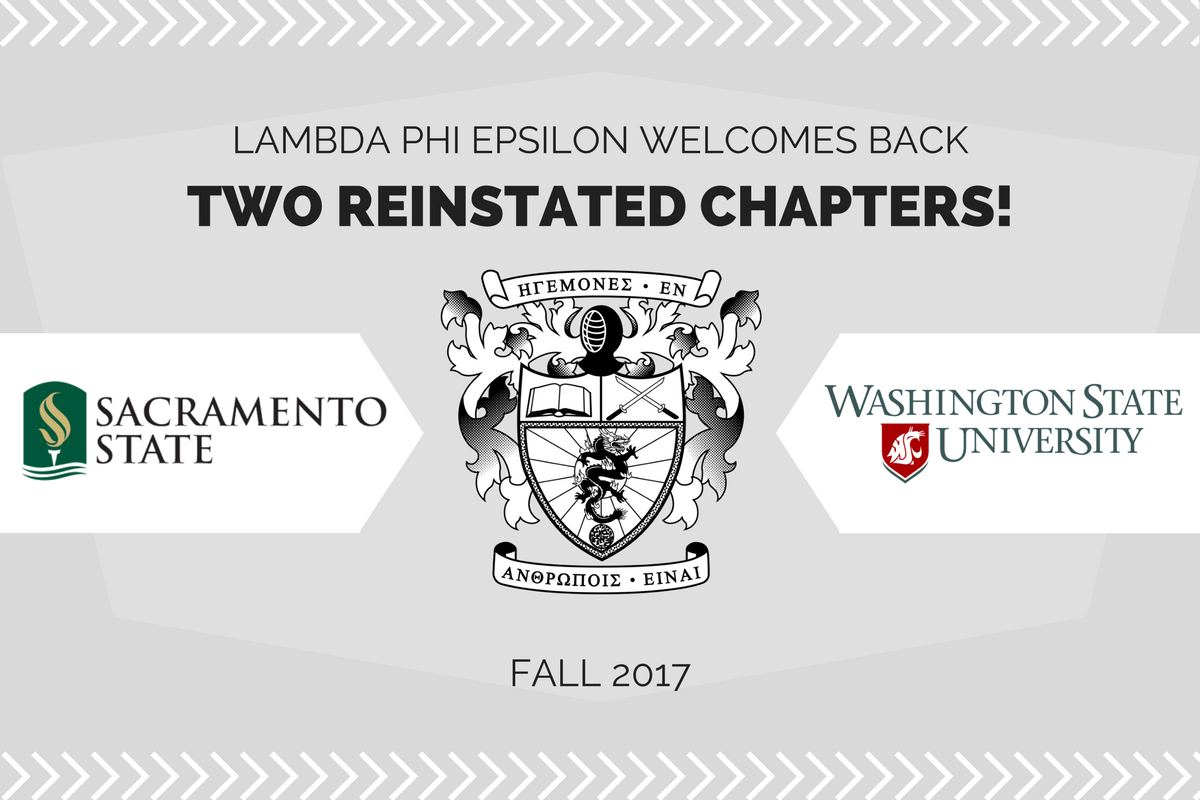 Posted at 08:59h in Fraternity Announcement by LFEfraternity 0 Comments

The International Board of Lambda Phi Epsilon is elated to announce the successful reestablishment of two chapters in the West Coast region this fall.

“We’re pleased to be able to bring Lambda Phi Epsilon back to these two campuses,” said International President William Tan, “and we look forward to being able to return to all of those campuses where we once had chapters in the years to come. We applaud all of the alumni who worked so hard to re-open these chapters.”

On December 10th, 2017, eleven new members at Sacramento State crossed into the International Fraternity. “As the first group in California to be initiated under the new Noble Member Program, the values that have been instilled in me and my newly crossed brothers will continue to be passed down to new generations of Lambda Men,” said Andy Vo, President of the Sacramento State Associate Chapter of Lambda Phi Epsilon. “In 1990, Sacramento State was the first California State University campus to establish a Lambda Phi Epsilon chapter. The opportunity to continue our legacy is truly an honor.”

Alumni from the West Coast region played an integral role in facilitating the rechartering process. “Re-establishing Lambda Phi Epsilon at Sac State would not have been possible without the leadership of our International Board, the United Sorority and Fraternity Council on campus, and the Sacramento Recharter Committee,” said John Diamonon, Alumni Advisor to the Sacramento State Associate Chapter. “We extend our full support to Interest Groups seeking to establish chapters in the West Coast.”

On December 2nd, 2017, seven new members were initiated into Lambda Phi Epsilon at Washington State University. “We understand that our presence on campus places us in a unique position to reach a large demographic of underrepresented students on campus. Using our platform, we aim to build and unite our fragmented multicultural community through the impact of our leadership and philanthropic endeavors,” said Malvin Malai Harrison, President of the Washington State University Associate Chapter of Lambda Phi Epsilon. “We’re constantly searching for how we can raise community standards while bettering our peers.”

“The year-long process, filled with deep reflections and bond building, culminated in an unveiling which our CFSL advisor praised as: ‘the best and most meaningful probate I’ve seen in years,’” said Atisheel Kak, Alumni Advisor to the Washington State University Associate Chapter. “The strong sense of duty and tight-knit brotherhood exuded by these seven men strongly assure the WSU community their commitment to engage in community service and philanthropy, and to develop a sense of identity for Asian American men on campus.”

A Resolve to Return

Director of Education Joshua Wells comments, “A few days ago my father reminded me of one of his favorite sayings: the race is not to the swift. The brothers of CSU Sacramento and Washington State University have shown an enduring commitment to their chapters, and have helped to prepare the next generation for continued success. I look forward to seeing the continued growth of these chapters and encourage them and all our members to keep running.”