Honored by His Excellency 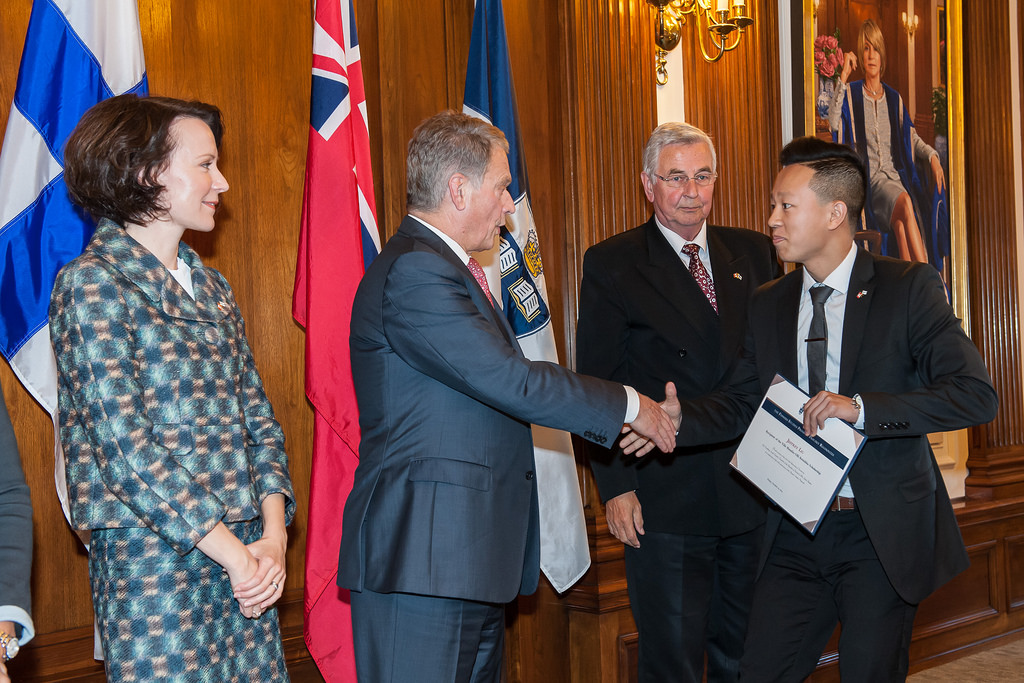 22 Oct Honored by His Excellency

Posted at 04:27h in Personal Growth by LFEfraternity 1 Comment

Earlier this October, Canadian senior Jeffrey Liu received more than just a generous scholarship to fund his interest in Finnish Studies. Liu shook hands and met with His Excellency Sauli Niinistö, President of the Republic of Finland, at an award ceremony hosted by the University of Toronto. Upon recognizing a select crop of outstanding scholars, the President engaged invited students, faculty, and administrators on discussions pertaining to the future of Finnish Studies in North America and current developments in international affairs.

Liu, a dual Criminology and Finnish Studies major, recounts the event as a one-of-a-kind experience. “Initially, I was extremely nervous since this was the first time I have ever attended a recognition ceremony as grand as this one. At the same time, I felt privileged to be sitting on the same table as President Niinistö, First Lady Jenni Haukio, and other distinguished guests and fellow award recipients.”

Lambda Phi Epsilon members from the University of Toronto describe Liu as an exemplary role model with impeccable work ethic. According to Chapter President Victor Hwangbo, “He is always taking the extra step to grow personally with the chapter along with its members. I know Jeffrey’s accomplishment will inspire others to go for their fullest potential. In the end, we are all very proud of him not only as a brother of Lambda Phi Epsilon, but as a family.” Per Toronto alumnus Jason Lau, Liu’s praiseworthy conferral from Finland President Niinistö “takes the concept of an international fraternity to the next level.”

For Liu, the recognition affirmed his fraternal value in scholastic achievement. “Thanks to the support of my family, friends, and brothers, I pushed myself academically throughout these years. It felt humbling to receive this competitive scholarship from the University of Toronto’s Finnish Studies Program. I am grateful to be recognized for the energy, effort, and dedication I invested in college by a revered world leader from my home country.”

Photo by Lisa Sakulensky. Learn more about the event at the University of Toronto’s website.