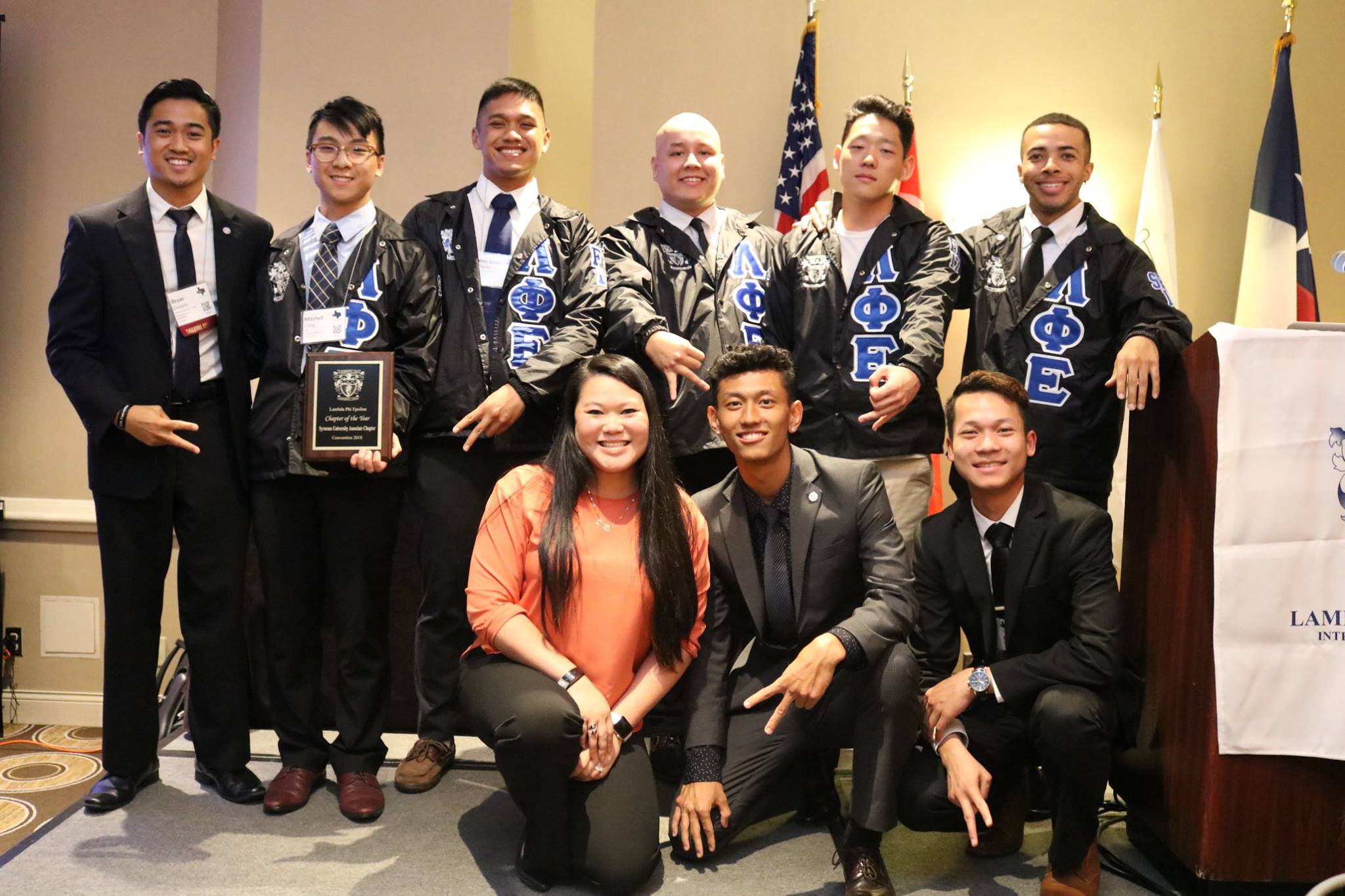 Posted at 18:04h in Fraternity Announcement by LFEfraternity 0 Comments

“Convention is a time to celebrate the successes of the past year, and we have a great deal to celebrate this year. We’ve added three new chapters and returned to two campuses where we were previously dormant, we chartered our first graduate chapter in Florida, and we grew the overall membership by more than twenty percent,” said Executive Director Jim Gaffney. “This has truly been a year for the record books.”

Convention XXIX was held at the Hyatt Regency Houston in Houston, Texas with 45 undergraduate and one graduate chapter in attendance. With more than 200 registered people in attendance, this was Lambda Phi Epsilon’s largest convention in recent years.

The three newly established charter classes—Rochester Institute of Technology, University of Maryland at Baltimore County, and University of Wisconsin at Madison—all performed at the annual Brotherhood Showcase on Friday evening. “Standing on stage in front of hundreds of brothers at Convention filled me with pride for Lambdas,” said Zadrian Huang of the RIT Associate Chapter. “Conveying that pride through our chapter step routine really was an exhilarating experience for our performing actives, and I bet it was just as fulfilling for all our fellow charter brothers.”

This year’s Convention keynote was presented by Vanessa S. Teck and Amy C. Wang, both PhD students and research associates for the National Institute for Transformation and Equity at Indiana University. Held jointly with alpha Kappa Delta Phi, 14 different workshops were spread across three session blocks, allowing attendees to chart their own path of personal and chapter development. The workshops were designed to reframe new perspectives on contemporary issues, and suggest new ways of thinking about the role fraternities have on campus and in local communities. Workshop topics and presenters include:

“Presenting a workshop as an undergraduate was definitely a unique way to meet other bros. It showed me that you don’t have to be an old alumnus to make an international contribution to the organization,” said Matthew Wright from North Carolina State University. “If it’s worth teaching, people will want to learn.”

The arts play a critical role in enriching the lives of the membership, and so the International Board’s Programming Team organized an evening event that featured artist LIONE, opened by Lambda Phi Epsilon alumnus Jovian Ho and DJ Trism of alpha Kappa Delta Phi.

“With Convention returning to the heartland of Houston, TX, I witnessed a brotherhood stronger than ever,” said Programming Coordinator Jonathan Wong.“The overall sentiment I’ve been getting from undergraduates is that the social event was a huge success that brought in over 800 attendees. This is something we have been diligently working on to provide undergraduates an extraordinary experience for their convention.”

The final day of Convention commenced with a meeting of the House of Delegates, which voted on candidates for the Board of Directors, proposed legislation, and reviewed a case for chapter promotion.

Finalizing a gender inclusion resolution introduced at Orientation 2018, the House of Delegates voted to amend the non-discrimination clause of the Constitution of the Fraternity to explicitly define gender identity with the following language: “Gender identity/expression shall be defined as the gender with which an individual identifies at the time of induction, not their sex as assigned at birth.” The referendum passed with the support of an overwhelming majority of the House of Delegates.

The status promotion meeting also illustrated how one chapter sought to reclaim its legacy as a bastion of brotherhood in the Southwest region. The meeting resulted in UT Austin’s promotion from an Associate Chapter to an Active Chapter. “What a journey! For a chapter to not only be able to come back from an eight-year suspension, but also to receive their Zeta letters back is truly special,” said Southwest Governor David J. Kim. “The amount of love and passion that the alumni and actives have shown over the past few years is a true testament to what Lambda Phi Epsilon means to brothers of all ages. This journey has humbled us all and made us appreciate all the little things in life including the fact that the University of Texas at Austin was gracious enough to have us back on their campus.”

The Closing Banquet marked the final event of the weekend, which recognized the outstanding work of individuals and chapters who advance the fraternity. This year, the Board of Directors created a new set of service awards to recognize distinguished service by volunteer officers. Director of Chapter Development Victoria Chan-Frazier was selected as the inaugural Officer of the Year. “This marks the third year of my service to Lambda Phi Epsilon on their International Board,” said Chan-Frazier. “I am so grateful for a fraternity who has welcomed me with opened arms, a fraternity with phenomenal men, a fraternity who trusts me to do this very important work with their undergraduate membership.”

Last week, I was honored with the 2018 Officer of the Year recognition for @LFEfraternity, whom I’ve been serving since 2015. There are many people to thank (it’s up on my FB) because I’m incredibly humbled and MAD HYPED!!! Thank you so much for this honor!!! 💙🐉 #LFEConvention pic.twitter.com/Jj4uMas864

Election Board of Directors

“With the fraternity reframing its values in rewarding brothers for their efforts throughout the year and UT Austin reclaiming its active status with the support of every chapter it had fathered, I felt a collective sense of pride and motivation for action among all my brothers,” said Programming Coordinator Billy Nguyen.